Listening Begins with the Pause

Stephen (not his real name) was in his weekly management meeting and as usual, he found himself getting frustrated with his colleague Bob.    Every week, Bob was vocal in his opinions and Stephen often found his mind wandering when Bob would launch into an explanation or ask questions that Stephen thought were unnecessary.  The fact was, that although Bob was extroverted, he often brought up information that needed to be addressed. Stephen knew he was missing potentially critical discussions by “zoning out” but he didn’t know how to force himself to listen. As his executive coach, I asked Stephen how well he listened to himself.  Was he aware of the subtle tension that preceded his annoyance with Bob?  What was the thinking that preceded him tuning Bob out? How adept was Stephen at listening to himself when he was anxious or stressed?  I suggested that he try Mindfulness Meditation:  simply follow the breath noticing the full inhale, pause, exhale, pause, inhale.  As he practiced every day for 10-15 minutes, he noticed the pause, between inhale and exhale and the longer pause between breaths.  He became aware of his wandering thoughts when practicing and eventually this carried over into his workday.  As he learned to pause and to listen to his wandering thoughts in meditation, he became able to pause before zoning out in management meetings.  The pause helped him to be at choice so he could to listen to Bob’s message despite his talkative style.

View all posts by Marjorie Johnson →

Research shows mindfulness enhances leadership, wellness and attention.
Learn how to practice mindfulness with our CD “Come to the Quiet: Meditation for Relaxation and Healing”. 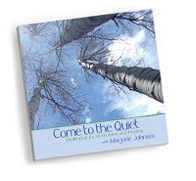